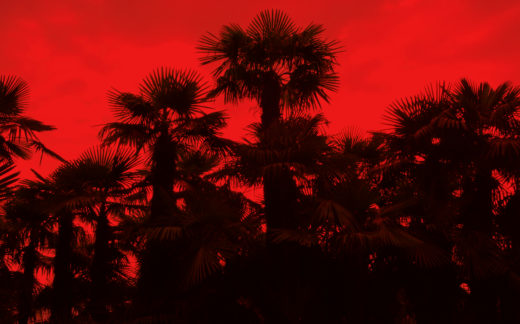 The first science fiction film ever made for plants, Otherworldly tells the story of an interstellar voyage from Earth to another habitable planet twenty lightyears away. The film begins at dawn with an everyday terrestrial sunrise, followed by planetary liftoff. Many different star systems are subsequently encountered, ranging from white dwarfs to blue giants. In each instance, the spectrum of the star is projected onto the foliage based on the star’s Morgan-Keenan classification. After a dramatic close call with a binary star system, the film ends where no vegetable – or human – has ever gone: the habitable exoplanet Gliese 581d, where the botanical audience enjoys the setting of the red dwarf star illuminating its new extraterrestrial home. The forty-minute two-channel video is fully immersive, with projectors directed at plants from both sides, imparting the phenomenon of movement for maximum realism. Otherworldly is the final part of a cinematic trilogy directed by Jonathon Keats. The other two films are Pollinated (pornography for plants, featuring honeybees pollinating flowers) and Strange Skies (a travel documentary featuring daylight from Italy, originally screened for houseplants in New York City).

Jonathon Keats is an experimental philosopher, artist and writer based in the United States and Italy. His conceptually-driven interdisciplinary projects explore all aspects of society through science and technology.