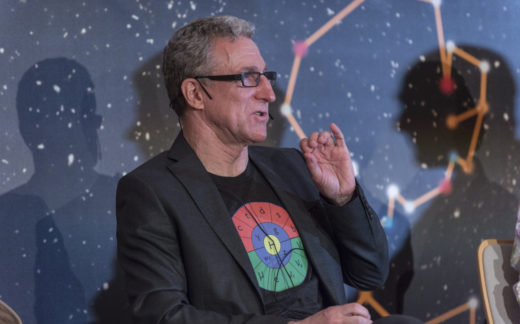 Mark Levinson is the director and co-producer of the award-winning documentary feature Particle Fever. Before embarking on a film career, Mark earned a PhD in theoretical particle physics from the University of California at Berkeley. In the film world, he first became a specialist in the post-production writing and recording of dialogue, working on over forty feature films including The English Patient, The Talented Mr. Ripley, Cold Mountain, Seven, The Rainmaker, Johnny Mnemonic and The Social Network. His directorial debut was the fiction film Prisoner of Time, a story about two former Russian dissident artists after the collapse of the Soviet Union. Most recently, he directed The Bit Player, a hybrid feature about Claude Shannon, the founder of information theory. Mark won the inaugural Stephen Hawking Medal for Science Communication and the inaugural Robert E. Sievers Leonardo da Vinci Award for his work in the cross-disciplinary realms of art and science. He is currently adapting Richard Powers’s award-winning novel, The Gold Bug Variations, into a feature film.

“Catching Particle Fever” A talk by Mark Levinson about his journey from physics to film and back again to physics with his film Particle Fever, and his ongoing exploration of art and science in his films The Bit Player, The Universe in a Grain of Sand, and The Gold Bug Variations. Note that this session […]

On the occasion of the 10th anniversary of the discovery of the Higgs boson, and in the presence of filmmakers Mark Levinson (Film Director) and Walter Murch (Film Editor and three Academy Awards Oscar winner), join us for a special evening at the Globe of Science and Innovation on Sunday 3 July at 5.00 p.m. […]