The 11th edition of the CineGlobe International Film Festival Inspired by Science is coming to CERN from June 29 to July 3, 2022!

Daytime or evening, weekday or weekend, there’s something for everyone! Check out the full programme here.

52 short films have been selected from almost 1000 submissions for this year’s competition. They are presented in 7 general sessions mixing fiction and documentary, plus a session for families with films suitable for all ages.

From Wednesday to Saturday, you can watch:

– The Fiction and Documentary categories: all of the short films in the two categories have been divided into seven sessions which are screened every day in the Open Air space*.
– The Youth category: one session per day in the Open Air space* and continuously in the Cinema Caravan
– The “Immersive” category awaits you at the VR Cinema located in the IdeaSquare space.

*In the event of inclement weather, screenings planned outside will take place inside the Globe.

You will be able to evaluate all of the films viewed and thus contribute to deciding the Audience Award in each category.

On Sunday, the audience’s favorite films and the jury award winners will be screened back to back in special programmes so you can catch (or re-watch) the best of the fest!

This year, we have two very special masterclasses in store for you. Mark Levinson, the director of Particle Fever and the Bit Player, two very different films on science, will present the ways in which he’s learned to communicate science through a narrative approach more akin to fiction filmmaking than traditional documentary. In addition, renowned three-time Oscar winner and editor of Particle Fever, Walter Murch, will be with us to discuss the nuances of editing narrative documentary versus scripted fiction films. The masterclasses and associated discussions will also be live-streamed online.

Get hands-on with the basic principles of film and photography in our Moviola Animation and Tetra Pak Camera workshops! Manipulate real 35mm film, rework the images one by one to create an animation, and then visualize the result on a 1930s-era Moviola projector. In the Tetra Pak Camera workshop, you’ll build your own pinhole camera using an old milk carton, and learn to develop your photographs with coffee and vitamin C. Places are extremely limited, so make sure to register in advance. To fully enjoy the CineGlobe Festival, why not combine a workshop with a session of short films!

Wednesday to Friday, join us for feature films in the evening from 21h!

We have two stimulating documentaries brought to you by our friends at the FIFDH and Filmar, and then join us for the Hollywood blockbuster “Free Guy” on Friday night! On Saturday, attend our Jury and Audience Awards evening for each category, with a screening of the winning films, in the presence of the filmmakers who are back at CineGlobe for the first time in three years!

Sunday evening, in partnership with CERN, take part in an exceptional evening celebrating the 10th anniversary of the discovery of the Higgs boson, one of the most important in the history of physics. Filmmakers Mark Levinson (director) and Walter Murch (triple Oscar-winning editor) will join us to present their film “Particle Fever”. After the screening, Fabiola Gianotti, Director General of CERN will lead a panel of experts around the question of the future of particle physics. This is an opportunity not to be missed.

The discussion after the film will be available online at webcast.cern.ch

Feeling a little peckish? Got a big thirst? Head to the food trucks that will serve delicious food and refreshments throughout the festival.

Workshops, 3D room-scale VR experiences and special events (Awards Ceremony and the “Particle Fever & the Higgs@10 Years” celebration) can be booked in advance. You may also check upon arrival at the information desk if reservations are still available.

– In case of no show, available seats will be given on a “first come, first served” basis.
– Extra 3D room-scale experience slots are also available without booking.
– The “Particle Fever & the Higgs@10 Years” celebration will be simulcast without reservation in the open-air space.

Thanks to our generous sponsors, all activities of the festival (except food and drinks) are free of charge.

Click on the icons for each type of activity, or simply click on the programme grid to go directly to the page you’re looking for. 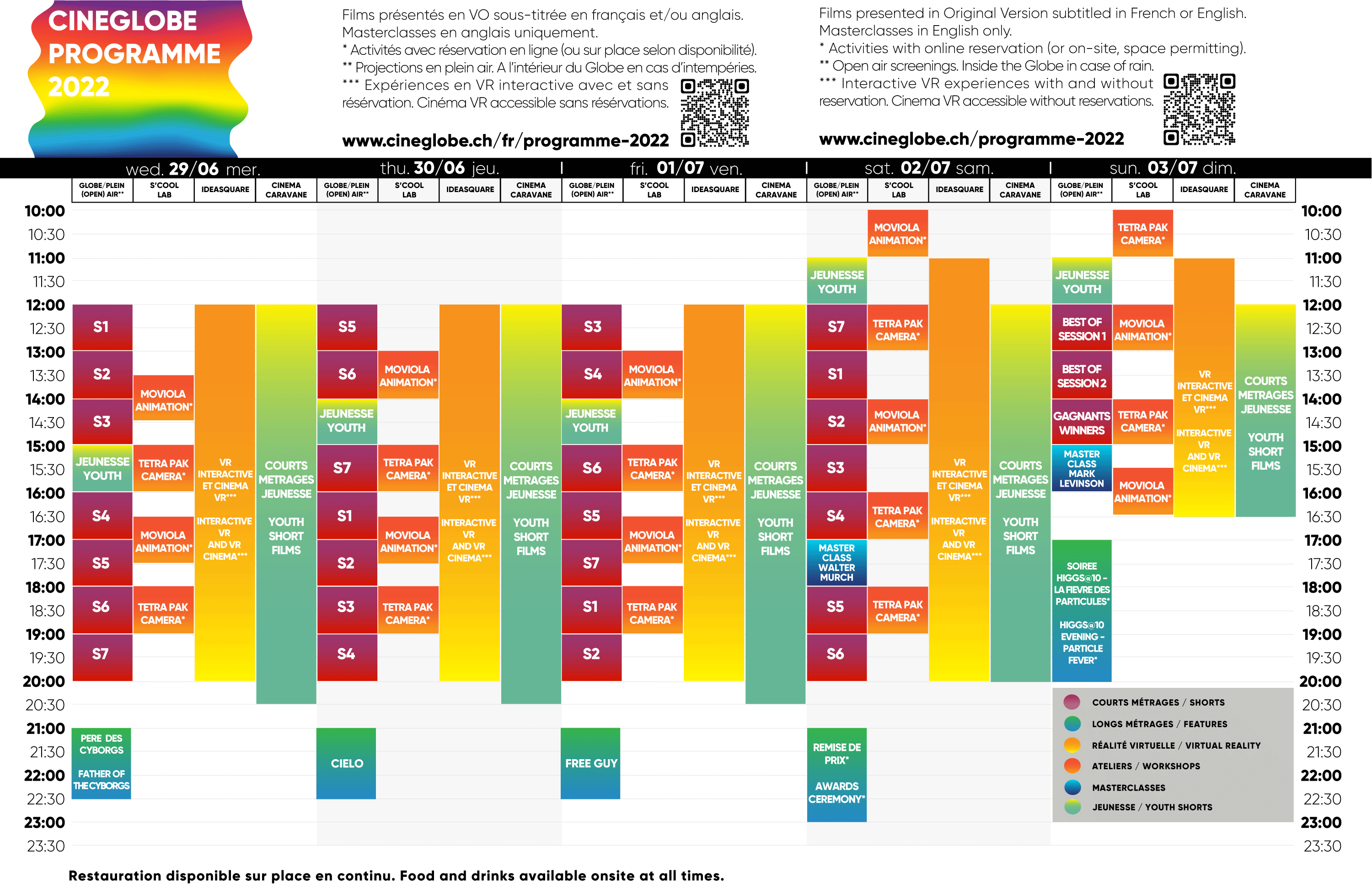